Humble and Fred's 10 Years of Podcasting: A Timeline 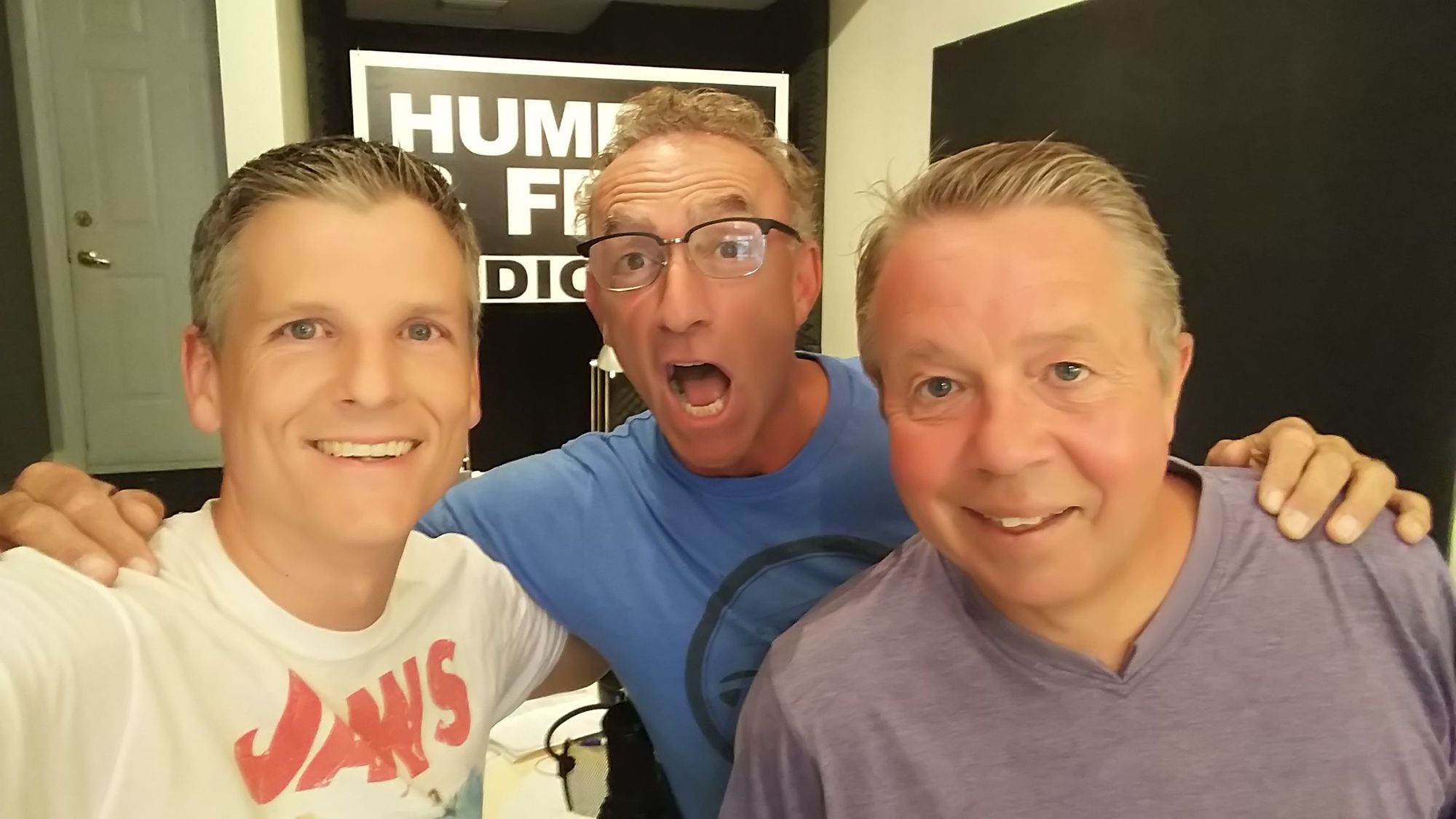 If you're a Toronto Mike'd listener, you likely heard my recent episode with Humble and Fred chronicling their ten years of regular podcasting. I've had to add that "regular" qualifier because technically this all started in December 2006, which puts it closer to 15 years, but those first five years of podcasting were sporadic at best. In October 2011, we got serious, and the guys started recording every weekday.

Going back to December 2006, Humble Howard Glassman and Fred Patterson were both out of terrestrial radio for the first time.... ever. Fred had been fired from Mix 99.9 in 2005, and Howard followed a year later. Without a radio station, and with an itch to broadcast together again, the timing was right to try the burgeoning format of podcasting.

Everyone collected at Dan Duran's house, audio was recorded, and I took it from there. The first Humble and Fred podcast was available to anyone with an internet connection.

Let's fast forward to the summer of 2011. Howard's time at EZ-Rock / Boom 97.3 had come to an end with another firing, and Fred's time as program director of Corus stations in Peterborough was over, and the idea was to podcast regularly until radio came calling again. I was the technical guy behind the curtain ensuring their broadcast was a podcast. The first time I wrote about something brewing was August 4, 2011. Things really shored up during lunch on August 16, 2011. The first episode was recorded on October 14, 2011

Those first couple of weeks in October 2011 were something else. It was really the first time I had that perspective on how the cake was baked, and I'd watch guests wander into the studio, sit down with the hosts, and chat. I'd see audio elements weaved into the program, Peter Cugno's great imaging, radio bits executed, and a live-to-air style production. And even though no cheques were being cashed, there were live ad-reads. To be honest, it was during this two-week period that I decided I should launch Toronto Mike'd. That would happen nine months later.

At first, the producer of the show was a nice fellow named Jason Kinder. The guys tell me he just showed up and wanted to produce the show. The audio files were hosted by a fan named Pete McPhedran. In these early days of podcasting, it felt like I was writing the blueprint. The experience was invaluable.

During that first year, a Humber College graduate named Phil Hong became "Phil the Friday Intern" and he never left. Phil continues to work on the podcast and will soon be celebrating his own 10 year anniversary with the show.

Kelly Cutrara, now the afternoon drive host at Global News Radio 640, also became a third voice on the show. I remember a live holiday show at Wayne Gretzky's restaurant with this early crew of Humble, Fred, Phil, Jason and Kelly. At this point, the show was purely a podcast, and it was great fun.

I remember thinking we were on to something when Corus sent a legal letter that they owned the name "Humble and Fred". I believe the guys ended up buying it back for $5000. This actually happened!

At some point, Humble and Fred made a decision to replace Jason with Eileen Ross. Eileen had actual radio experience and Howard had enjoyed working with her at Standard Broadcasting. Eileen settled in as the new producer and, when Kelly Cutrara moved on to work in terrestrial radio, a third voice on the mic. It was around this time that Ian Service entered the fray. His company started hosting the audio files we baked daily, and that's still the case today.

The problem, apparently, was that Humble and Fred broadcast live on Kingston radio from their studio in Toronto. Kingston wanted their morning show to record from Kingston. It's a shame this experiment failed so miserably, because the plan was to simulcast Humble and Fred into other smaller markets across the country. Those plans were quickly aborted.

In terms of physical recording space, Humble and Fred have had three studios. First, they sublet space from a now-defunct production company called RedFish. They soon outgrew that space, and secured their own space in the same building on Thirtieth Street in Etobicoke. Then, in a smart financial move, they bought a townhouse on The Queensway just east of Islington with a street-level commercial space for recording. Howard lives in the three floors above.

Initially, there was no washroom for guests, and Howard didn't want guests wandering into his residence, so the installation of a toilet and sink was financed by loyal Humble and Fred fans who donated over $10,000. That's right, they proudly "crowd funded the shitter".

As far as producers go, Eileen was great, but a difficult decision was made to part ways and Amanda Barker became the show's new producer and third voice on the microphone. SiriusXM also came calling and Humble and Fred started broadcasting live on their Canada Laughs channel Monday through Thursday. This is when they started taking Fridays off, a tradition that continues to this day.

The show broadcast on SiriusXM was recorded and distributed as the podcast. This deal lasted five years until SiriusXM decided not to renew. Suddenly, the podcast was just a podcast again, but not for long. Bell Media's Funny 820 was being run by a gentleman named Mike Nabuurs who had a history with Humble and Fred (he would write the Humble Report jokes Howard would read on 102.1) and he managed to secure Humble and Fred as the new Funny 820 morning show. Again, this show was recorded for the podcast, but there was to be no swearing and 25 minute segments so the station could air news and traffic updates, along with terrestrial radio ads.

Dan Duran, who hosted the first ever Humble and Fred podcast recording at his west Toronto home, is a longtime friend of Howard and Fred's who used to produce the show on CFNY. When he was relieved of his duties as a weather specialist on CHEX TV, he started making daily appearances on Humble and Fred and continues to do so to this day.

In March 2020, the global COVID-19 pandemic disrupted everything, and Fred started joining the show remotely via Zoom. Guests were also moved to Zoom. Other than my podcast a couple of weeks ago, Humble and Fred haven't recorded from the same physical space since that day 19 months ago.

When Bell Media sent Humble and Fred a "your services are no longer required" notice in early 2021, a decision was made to quit radio. The show would sound better, the revenue stream wouldn't suffer, and it would be far more fun to simply be an independent podcast that live streams on Facebook. We've been that way since February 2021 and haven't missed radio, terrestrial or satellite, one iota. Humble tells me September 2021 was the most lucrative month in the history of the podcast. To be honest, we should have fired radio long ago.

Through ten years of podcasting, there have been many eras, from K-ROCK to Sirius XM to Funny 820, bookended by stretches of fiercely independent podcasting. The show has been sprinkled with tales of Howard's much younger lady friend, his post breakup Tinder rampage, his ever-present golf obsession, the Trump years, Fred's breast reduction surgery and TURP procedure, Howard's hair transplant, a return to stand-up, some fun controversies, and plenty of laughs.

Congratulations on ten years of podcasting. When I reach this milestone in August 2022, it's only because of what I witnessed all those years ago. It's been a thrill having this unique vantage point for the past 15 years, and I've learned a great deal.

Here's to another ten.