I've been slow to update the list of Canadian songs to top the Billboard Hot 100, because Drake is just too damn prolific. Since his his ninth #1, a collaboration with Future and Young Thug called "Way 2 Sexy," he's tallied two more. "Wait for U" is a Future song
Continue Reading

Drake has his ninth #1, a collaboration with Future and Young Thug called "Way 2 Sexy." Here's the complete list of 61 songs performed by a Canadian citizen to top the Billboard Hot 100 chart. It's Love-Love-Love by Guy LombardoCry by Johnnie Ray and The Four LadsSh-Boom by The Crew-CutsDiana
Continue Reading

Just Bieber has his eighth #1, a collaboration with Aussie The Kid LAROI called "Stay." Here's the complete list of 60songs performed by a Canadian citizen to top the Billboard Hot 100 chart. It's Love-Love-Love by Guy LombardoCry by Johnnie Ray and The Four LadsSh-Boom by The Crew-CutsDiana by Paul
Continue Reading

Toronto's The Weeknd has his sixth #1, but this time it's a collaboration with Ariana Grande called "Save Your Tears." Here's the complete list of 59 songs performed by a Canadian citizen to top the Billboard Hot 100 chart. It's Love-Love-Love by Guy LombardoCry by Johnnie Ray and The Four
Continue Reading

Toronto's Daniel Caesar has his first #1 with "Peaches", the latest single from fellow canuck Justin Bieber. The song debuted atop the Billboard Hot 100 chart and became Bieber's seventh number one. Bieber also became the first solo male artist to debut at number one on the Billboard Hot 100
Continue Reading

Toronto's Drake is the first artist ever to debut three songs in the top three simultaneously. With "What's Next," Drake adds his eighth Hot 100 No. 1, while the three songs up his total to a record-extending 45 top 10s. Drake also joins The Beatles and Ariana Grande as the
Continue Reading 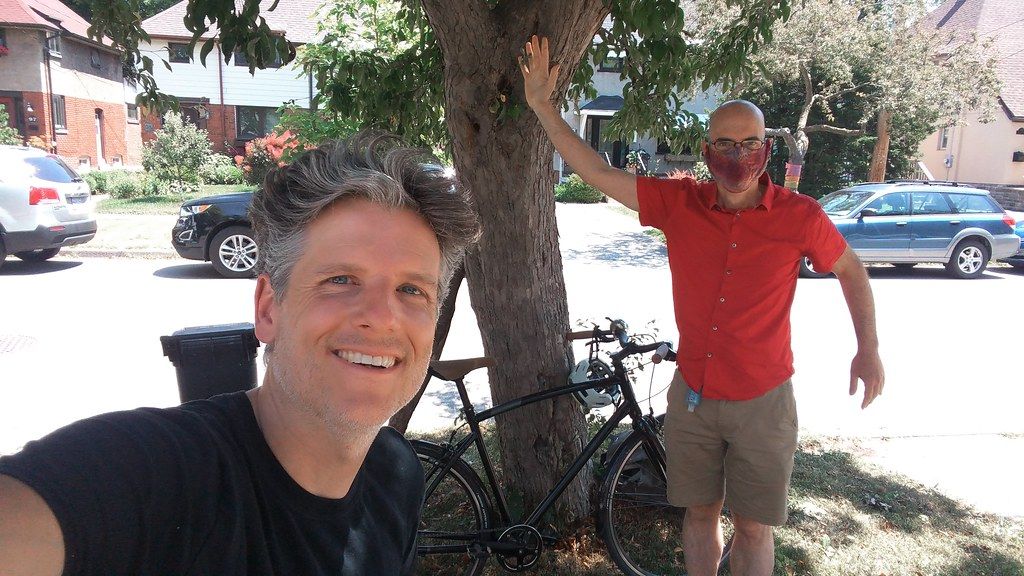 In this 677th episode, Mike is joined by music journalist Michael Barclay as he kicks out 10 Toronto Jams. This episode is exactly 1:40:27. You can listen to this episode in a variety of ways: Subscribe in iTunesSubscribe in Google PodcastsListen via Google Play MusicSave to your Spotify
Continue Reading

By Toronto Mike • Tuesday, April 14th, 2020 • 0 Comments
Streaming has changed this chart forever. It's as if MLB expanded their regular season to 200 games and then celebrated a new single-season HR record. The new rules are certainly benefiting Canadians, however, and Drake in particular. With "Toosie Slide" he becomes the first male artist to accomplish three number-one
Continue Reading

By Toronto Mike • Tuesday, December 17th, 2019 • 0 Comments
Sorry I'm a little behind on this one, but the 12:36 newsletter just informed me that Toronto's very own The Weeknd had the number one song on the Billboard Hot 100 last week. That's the good news for him. The bad news is that "Heartless" recorded the biggest drop
Continue Reading

By Toronto Mike • Monday, January 22nd, 2018 • 0 Comments
Last week, I had one of those surreal moments that you can't believe is actually happening. Legendary sports broadcaster Dave Hodge visited my home and spent a couple of hours with me in my basement while he shared his 100 favourite songs of all-time. Yes, this actually happened, and I
Continue Reading

By Toronto Mike • Wednesday, October 25th, 2017 • 0 Comments
With apologies to Rush, here are a few of my all-time favourite instrumental songs. Add yours to the comments! Bonus points if you embed a YouTube video of the song. Red Hot Chili Peppers - Pretty Little Ditty The Allman Brothers Band - Jessica Dick Dale and the Deltones -
Continue Reading

By Toronto Mike • Wednesday, February 24th, 2016 • 0 Comments
This used to be a rare event, worthy of noting, but now it's a regular occurrence. Note though, this is a Rihanna song featuring Drake. Drake has never hit #1 on his own. Here's the complete list of 44 Canadian songs to top the Billboard Hot 100 chart. It's Love-Love-Love
Continue Reading

By Toronto Mike • Sunday, February 15th, 2015 • 0 Comments
I started watching Saturday Night Live during the Sandler era. That crew, with Dana Carvey, Mike Myers, Chris Farley, Phil Hartman, David Spade and Chris Rock, introduced me to the world of SNL. Since then, I've watched it off and on over the years. Sometimes I'd tune out for a
Continue Reading

My 10 Favourite Episodes of Toronto Mike'd in 2014

10 Most Downloaded Episodes of Toronto Mike'd in 2014

By Toronto Mike • Wednesday, December 31st, 2014 • 0 Comments
Toronto Mike'd took a giant leap forward in 2014, attracting interesting guests and finding a whole new audience. You can't judge the quality of an episode by the number of downloads, but it does give some insight into the Zeitgeist. Here are the 10 most downloaded episodes of Toronto Mike'd
Continue Reading

By Toronto Mike • Monday, November 24th, 2014 • 0 Comments
1. Gordie Howe - 97/100If you're going to rank the Canadian Gords, you've got to open with Mr. Hockey. The man scored 801 goals and recorded 1049 assists over his lengthy and respected NHL career. Gordie Howe also played the unsuspecting object of Ms. Krabappel's affections in Bart the
Continue Reading

By Toronto Mike • Sunday, January 5th, 2014 • 0 Comments
There were 1090 sources of traffic to this site in 2013.  Excluding search engines, here are the top 10 sites that sent visitors over here throughout the year. StumbleUpon.comTwitter.comFacebook.comredditGawkerBlogTOWikipediaMy Toronto ScoopHumble and Fred RadioCanadian ThinkerInbound links are always appreciated, and whenever possible reciprocated.
Continue Reading

10 Celebrity Deaths of Significance in 2013 (According to Me)

By Toronto Mike • Sunday, December 1st, 2013 • 0 Comments
It's December, and that means you'll likely need to assemble a Christmas party playlist for a holiday party or two. A great deal of Christmas music is awful, but there are a few dozen or so I can stomach.  Here are my personal favourite Christmas songs if you need a
Continue Reading

25 Stellar Rain Songs for a Rainy Saturday in Toronto

By Toronto Mike • Saturday, September 21st, 2013 • 0 Comments
It's been raining cats and dogs all morning in Toronto and it doesn't look like it's going to let up for hours yet.  That was the perfect excuse for me to assemble a brilliant 25 song "rain" playlist.  Every song had to have "rain" in the title. I didn't include
Continue Reading

10 Songs With Mother in the Title

By Toronto Mike • Sunday, May 12th, 2013 • 0 Comments
Happy Mother's Day to my mom and all the mothers out there. Here's a list of ten songs with mother in the title.  They're all great songs, even if a few of them aren't exactly on message with today's celebration. Mother and Child Reunion - Paul SimonGood Mother - Jann
Continue Reading

By Toronto Mike • Thursday, May 9th, 2013 • 0 Comments
I've been podcasting since August, and during that time I've learned a few things. 1. Mics Matter If you're building a home studio, don't cheap out on the microphones.  The most important part of the puzzle is the mics and they're not cheap.  I bought three RØDE Procasters and that
Continue Reading

By Toronto Mike • Tuesday, April 30th, 2013 • 0 Comments
I just learned that I have never seen half of the ten highest-grossing films of all-time. Here are the top ten and whether I've seen it or not. Avatar - seen itTitanic - seen itThe Avengers - seen itHarry Potter and the Deathly Hallows – Part 2 - have not seen
Continue Reading

My 10 Favourite Movies of All-Time

Nirvana Music in Film and TV
Louise Fletcher, Dead at 88
You Can't Take a Picture of This, It's Already Gone
Open Mike
José Miguel Contreras from By Divine Right: Toronto Mike'd Podcast Episode 1117
Pizza Pasta Made Perfect
Tweets by torontomike