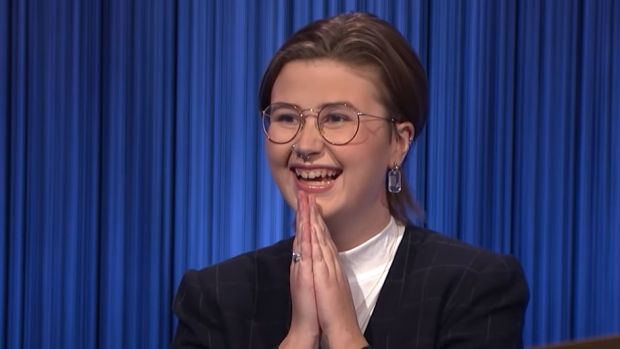 When the timing is right, I'll still flip on Jeopardy at 7:30pm on a weeknight. I've been watching forever, and even though the local station broadcasting the game show has changed a few times, and Alex is no longer with us, I still love yelling out the answers.

For the record, it's currently airing here on YES TV, which used to be Crossroads Television System (CTS), or Christian TV, as I used to call it. And the show is now hosted by either Ken Jennings or Mayim Bialik, depending on the week. And since we're getting specific, it's actually Jeopardy! with an exclamation mark.

But what's prompted this post about Jeopardy? It's Mattea Roach, of course. The 23-year-old Torontonian (who is originally from Nova Scotia) won again Friday night, adding another $28,001 in winnings for a total of $210,802 USD.

Not only has Mattea Roach been dominating, but she's only 23! And she's got a wicked awesome personality to boot.

Long may she run, but when this streak eventually ends, and it always does, I'm hoping she'll come on Toronto Mike'd to talk about it.

About Toronto Mike
Toronto
I own TMDS and host Toronto MIke'd. Become a Patron.
Previous Post : In Defense of The Wave   Next Post : What it's Like to Live with Anxiety: Tips for Students to Help Them Cope