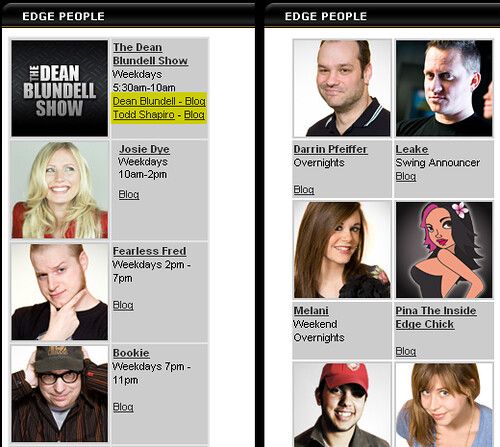 Edge 102 (or CFNY if you're an old guy like me) has removed all traces of Jason Barr from their website.

If you visit his bio page or his blog, you'll find this:

Also, The Dean Blundell Show is now being promoted as a duo: Dean Blundell and Todd Shapiro.  Jason Barr isn't part of the team, despite being a holdover from the Humble and Fred show (Danger Boy, anyone?) and a founding member of DBS on Edge 102.

I liked Jason, not just because he was a holdover from my Humble and Fred Show, but because he hooked me up with CASBY and Edgefest tickets.  I honestly don't know if he was fired, but it wouldn't surprise me.  You can visit my Edge 102 ~ CFNY category page to relive the rapid decline of this once stellar station.

Jason, I hope you've landed on your feet.  Let us know how you're doing when you get a chance.  An uninterrupted decade doing mornings in Toronto is no small feat.

About Toronto Mike
Toronto
I own TMDS and host Toronto MIke'd. Become a Patron.
Previous Post : Dumb Shit We Do As Teenagers (or How I Saved Stuffed Animals on Black Monday)   Next Post : This Jays Fan Wants Jose Bautista To Slow the F**k Down