I Love Dirty Work and I Don't Care Who Knows It 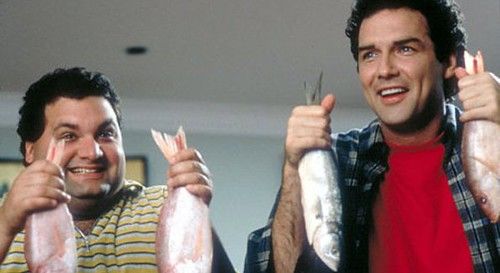 You know that movie you really, really like that everybody else hates?  We all have one.  For me, that movie is Dirty Work.

I've always liked Norm MacDonald, so when I learnt Norm was filming a Bob Saget film right in my own backyard, I was pretty psyched.  There are scenes filmed all over Toronto, from U of T to the office at Jane and Annette.  There's also a fantastic Chris Farley cameo on Annette.

I'm thinking about the hilarious Dirty Work today because Artie Lange is in the hospital recovering from a suicide attempt.  I first got to know Artie Lange from Dirty Work, but then got to truly appreciate his talent as co-host of The Howard Stern Show.  Artie was always brutally honest about his demons, demons that would lead him to stab himself nine times this past week.  According to this morning's Stern show, he's alive and physically out of danger now.  Here's hoping he pulls through and find some good in life.

If you want to see Artie Lange and his buddy Norm MacDonald at the height of their powers, watch Dirty Work.  I love it and I don't care who knows it.

I friggin' love that fish scene.

About Toronto Mike
Toronto
I own TMDS and host Toronto MIke'd. Become a Patron.
Previous Post : How Conan O'Brien Lost His Way   Next Post : The Slippery Slope of Independent Blogging