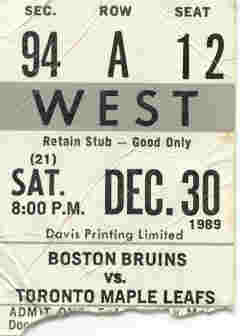 I attended the last Toronto Maple Leafs game of the 1980s.  I have the ticket stub to prove it.  I attended the game on December 30, 1989 with my buddy Joe and it remains to this day the most entertaining game I've ever seen live.  This is the story of my game.

The first 37:09 of play was dismal.  In fact, we had brought a megaphone and began heckling our beloved Leafs.  After one defensive lapse, we anointed a particular blueliner "Al I-Afraid-Of-The-Puck".  The Leafs trailed the Boston Bruins 6-1 at this point and with only a few minutes left in the second we were literally playing the funeral march.  We knew our limitations and overcoming a deficit of this nature against a far better team wasn't going to happen.  Furthermore, prior to this game, the Leafs were 1-16-1 when trailing after 40 minutes.  Conversely, the Bruins were 12-1-1 when leading after two periods.  To make matters even worse, the Bruins had won six in a row against us.

This is when my game becomes legendary.  After Vincent Damphousse scored to bring us within four, Gary Leeman began the unpredictable rally at 4:59 of the third.  Only a couple of minutes later, Luke Richardson scored to make it 6-4.  It was at this point that we began to believe in the unbelievable. Could we?  Would we?  Ed Olczyk brought us closer to this realization when he banked the puck in off Stephane Quintal behind Andy Moog.  It was 6-5 and the blue and white express was in full effect.

I think it would have been extremely painful to have lost this game 6-5 after trailing 6-1 so late in the contest.  Thankfully, I knew we'd complete this unprecedented comeback.  I knew we had a couple more rabbits in the hat.  Eddie O came through again on a break away to send my game into overtime.  The Leafs could actually win this game they had no business being in.  I was ecstatic, beside myself, in complete disbelief.  I didn't want to tie the Bruins in this final game of the 1980s, I wanted to beat them.

With 1:41 remaining in the extra period and after Al Iafrate made a great play to keep the puck inside the blueline, Wendel Clark whacked home the winner.  The Toronto Maple Leafs had defeated the Boston Bruins after trailing 6-1 late in the second.  My voice is still sore from screaming after Clark's goal.  It felt as if we had just won the Stanley Cup.

There were 16,382 of us there that night, but nobody left Maple Leaf Gardens happier than me.  I had just witnessed a miracle.

About Toronto Mike
Toronto
I own TMDS and host Toronto MIke'd. Become a Patron.
Previous Post : Rest in Peace   Next Post : The Quiet American