It Was 8-1: Processing the Blue Jays Epic Collapse 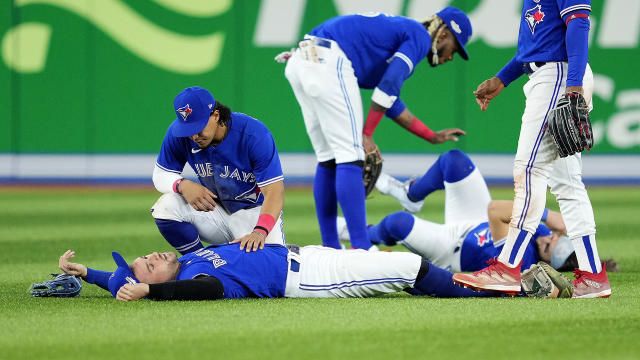 Losing Friday afternoon to the Mariners meant last night's ballgame at the dome was "must win". It was do or die, and the Jays bats were alive. It was 8-1 Jays, and I started to map out my Sunday should game three be at 2pm, 4pm or 7pm. I was counting those chickens, even though they hadn't yet hatched.

If you're a Jays fan, you know what happened next. John Schneider removed Kevin Gausman for Tim Mayza and in the blink of an eye it was 8-5, then there's the 8th inning ball that fell somewhere between shortstop and centre field. Bo Bichette and George Springer collided, and the game was tied at 9. You know the rest of the story.

There will be no game three today. The season is over and Blue Jays fever has broke. To all those who jumped on the bandwagon Friday, and I watched Saturday's game with five such people, it was a blink-and-you-miss-it postseason. That's all folks.

FOTM Bob Willette was tweeting that this was a Toronto thing. As if there's a Toronto team curse. And I get it... the Leafs have mastered the art of underperforming when it matters most and continue to find horrific ways to lose and disappoint, and now it seems the Jays are following suit. Yesterday's Jays loss felt very Leafs.

Bad take Greg. Outside of Raps only 1 major league win in nearly 20 years. 2015 was fun. But doesn’t count. They didn’t WIN. TFC win doesn’t count to most or Argos…or Rock…hell, even Wolfpack. I have thought it through. Toronto gonna Toronto. Born here. Live here

But this silly narrative conveniently omits the fact our Toronto Raptors won the 2019 NBA Championship. That happened, and it was spectacular. The Raptors, like the Leafs and Jays, is a "major league" pro sports team playing in the world's most competitive league. The Raps win a mere three years ago should have destroyed the "Toronto's gonna Toronto" narrative that pops up every time a pro team in this market bows out prematurely in the playoffs.

For what it's worth, I think yesterday's collapse in a must-win game the Jays lead 8-1 is the greatest collapse in franchise history. Some will argue 1987 was the worst, and I'm haunted by that final week of the regular season, but it was a slow burn over several games whereas yesterday's loss seemed to come in two spurts: Carlos Santana's 3-run blast and J.P. Crawford's bizarre 3-run pop-up double. That play will be discussed for ages. You should have heard my scream when the ball dropped.

If this is the greatest collapse in Blue Jays history, where does it rank amongst the many Leafs collapses? The 4-1 Bruins game seven wins by a landslide. It will be very tough to beat that one.

But there is no Toronto curse, in fact, curses don't exist, and one of our three "major league" teams won it all a mere three years ago, so it's not that bad being a Toronto sports fan. The sheer joy and celebration from 2019 will fuel me for another decade or two.