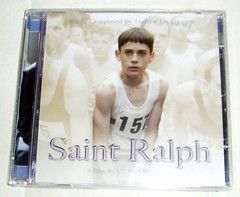 I have a copy of the unreleased soundtrack for the movie Saint Ralph.  If you shrugged your shoulders and muttered "so what" under your breath, I encourage you to read the entries on this page.

Now that you're up to speed, you know I've been in love with Gord Downie's cover of Leonard Cohen's Hallelujah since I first saw the film Saint Ralph.  You're also aware that this song isn't available anywhere.  You can't buy a copy of the Saint Ralph soundtrack, you can't purchase the song online and it has never been released as a single.  It simply doesn't exist anywhere other than in the movie, and a version ripped from the DVD is all I've had for the past year.

After years of hunting, I now have the unreleased soundtrack.  A wonderful person who shall remain anonymous became aware of my plight and blessed me with not one, but two studio versions of The Tragically Hip's Gord Downie singing Hallelujah.  This is truly a rare beast as only a few copies were pressed when they were trying to get it released as a soundtrack back in 2004.

So you don't think I've lost my mind, here are pics of the CD.  Before you ask me to share with you this official copy of the Hallelujah audio I'm afraid I can't.  Part of my deal with this anonymous donor is that I can't share it.  I will, however, continue to share the version ripped from the DVD.  For now, the polished Hallelujah is for my ears only, unless you want to drop by for a listen.

About Toronto Mike
Toronto
I own TMDS and host Toronto MIke'd. Become a Patron.
Previous Post : Best Player Never To Win It All   Next Post : Link: Toronto Google Maps Mashups