Conklin Carnies Save My Life - Tales From The Ex 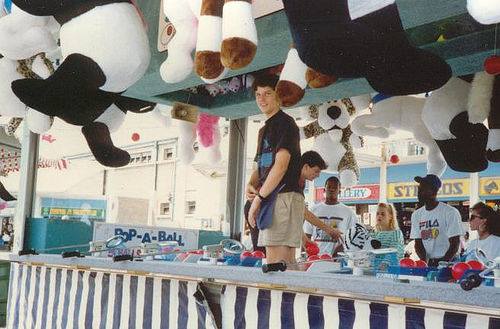 During the 125th Canadian National Exhibition, I'm sharing stories from my three years working there as a game booth attendant.  Below is one of many.

During the height of Madonna's Blonde Ambition tour in 1990, I was working a game with a Madonna-wannabee.  She copied that complete look, including that fake-blonde pony tail.  At this time, Ms. Blonde Ambition was also my manager and in charge of managing our shifts.

This particular game had a microphone and one of us was to be on the mic at all times creating excitement and attracting the next sucker.  I was on when I saw a couple of people decked out in 680 CFTR gear handing out swag.  In a shameless effort to score some free goods, I hollered "CFTR Rules!" into the mic and got their attention.  It worked because they came right over and handed me two tickets to see the Jays at SkyDome that night and attend a Pizza Pizza party beforehand.

Ms. Blonde Ambition had to rearrange the schedule so I could get my free pizza and check out the Jays but she had a condition.  She wanted the second ticket.  I agreed and that night I gorged on pizza and witnessed the first bug delay in Blue Jays history.  The game is rather infamous for the 35-minute bug delay and I'm proud to have been a part of it.

Here's where this tale from the Ex kicks into high gear.  The next night I was closing up the game booth after midnight when I saw Ms. Blonde Ambition's boyfriend walking towards me.  He was clearly drunk and was slurring something to the effect that I should stay away from his girl and he heard I asked her out.  There was no point reasoning with this guy.  He was there to kick my ass.

I was sixteen and not the biggest dude around.  This guy was older, bigger and full of booze.  It was after midnight at the CNE and I needed back-up.  Where was I to turn?

A Conklin carny was closing up his booth and I quickly approached him and in as few words as possible told him Ms. Blonde Ambition's boyfriend's was there to pummel me and I needed a little help.  Even though I wasn't working for Conklin, there was a code amongst us carnies.  We looked out for each other.  I'll never forget what this 100 pound, 40-something year old, mullet-headed carny said and did next.  He picked up a pipe, pounded it into his hand and called back behind the trailer to a collection of carnies enjoying an end-of-day brew, "You guys ready for a fight?".

This collection of Conklin carnies came through for me that night when I needed them most.  I worked for a rival company, but we were all in the same gang.  They saw I was in trouble and they took up the cause.  To this day I'm unsure how that night ended for Ms. Blonde Ambition's boyfriend, but he didn't bother me again for the remainder of the CNE.  I'm guessing he learned his lesson...carny style.

About Toronto Mike
Toronto
I own TMDS and host Toronto MIke'd. Become a Patron.
Previous Post : Rest in Peace   Next Post : The Monday Shuffle